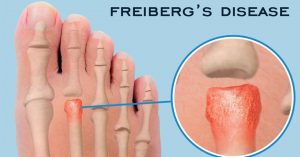 Freiberg’s disease/infraction (FI) is a not uncommon forefoot issue seen by Podiatrists, but there is surprisingly little research out there to guide evidence-based practitioners on the best approach to treatment. We have done our best to cover the most recent information on diagnosis and treatment on this debilitating, but ultimately very treatable issue.
FI is a condition of cartilage degeneration of the lesser metatarsal heads. Adolescent females are the “textbook” patients but both males and females may present with this condition later in life. Patients will usually present with a pain and swelling in the ball of the foot with or without a history of trauma. The second and third metatarsals are the most commonly affected, while involvement of the fourth and fifth is rare.(1)
The cause of this condition is as yet unknown. Most studies suggest a multifactorial etiology combining trauma, vascular, genetic, and altered biomechanics. FI is typically diagnosed clinically and confirmed with plain films, from which the stage of the disease can be determined (see Figure 1 below). Bone scans and MRI may be useful early in the disease process before radiograph changes are evident. Ultrasound can also be used to evaluate cartilage and bone loss in this disease. 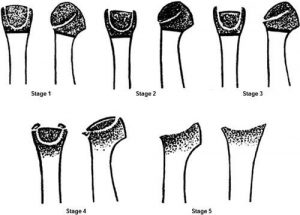 Figure 1 – Smillie’s classification of Freiberg’s Infraction (1)
Nonoperative Treatment
Nonoperative management is rooted in decreasing foot pressure and unloading the affected metatarsal. Smillie reports that spontaneous healing may occur at any stage and restoration of a normal metatarsal head may be possible in stage 1 to 3. Stage 4 and after fracture of the isthmus occurs, “perfection or anything resembling perfection is unobtainable.” (2) Reports in the literature describe stiff-soled shoes, casting, and orthotics as effective in managing low-grade FI. In some cases patients can continue activity even at the elite level, with Palamarchuck and Oehrlein (3) reporting a collegiate heptathlete with Freiberg’s infraction who was able to compete using a custom orthosis.
Operative Treatment
Gauthier and Elbaz (4) described a closing wedge dorsiflexion osteotomy of the metatarsal head in 53 cases of Freiberg’s infraction. At 22 months postoperatively, only 1 of the 53 patients had continued pain and he reported that there were no complications. Dorsal closing wedge osteotomies with crossed Kirschner wire fixation is also popular and generally successful (5).
What we do if these patients present to the Subiaco Foot Clinic
A. Establish stage of disease through imaging to determine if conservative or surgical treatment is appropriate. Any other causes of osteonecrosis ie steroids, rheumatoid arthritis or coagulopathy are also be assessed.
B. For lower-stage Freiberg’s a 3-month trial of oral anti-inflammatories and a custom foot orthotic to decrease motion at the painful joint is strongly advised. In some cases 4-6 weeks in a cam boot may beneficial in rapidly reducing painful symptoms, thereby fast-tracking a return to activity. Where possible all footwear should be as stiff-soled as possible particularly through the forefoot. We are able to prescribe appropriate footwear for our patients depending on their activities. Some examples of these include the Mizuno Paradox (Volume Trainer), Asics Gel Noosa (Road/Track), Addidas Terrex Agravic (Trail) and New Balance XC7 (Spikes).
C. For high-grade Freiberg’s or if the above conservative methods fail we know some fantastic a specialist foot surgeons who can surgically correct this issue.
References
1) Talusan P, Diaz-Collado P, Reach J. Freiberg’s Infraction: Diagnosis and Treatment. 2014; 7 52-56
2) Smillie, IS . Treatment of Freiberg’s infraction. Proc R Soc Med. 1967;60:29-31.
3) Palamarchuk, HJ, Oehrlein, CR. Freiberg’s infraction in a collegiate heptathlete. J Am Podiatr Med Assoc. 2000;90:77-80.
4) Gauthier, G, Elbaz, R. Freiberg’s infraction: a subchondral bone fatigue fracture. A new surgical treatment. Clin Orthop Relat Res. 1979;(142):93-95.
5) Edmondson, MC, Sherry, KR, Afolyan, J, Armitage, AR, Skyrme, AD. Case series of 17 modified Weil’s osteotomies for Freiberg’s and Köhler’s II AVN, with AOFAS scoring pre- and post-operatively. Foot Ankle Surg. 2011;17:19-