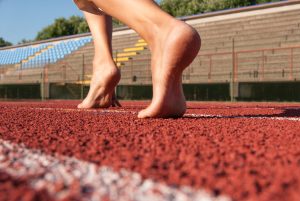 It’s a question podiatrists get asked on an almost daily basis: “What’s your opinion on barefoot running?” Generally my answer to this is “How long have you got?”

There are plenty of strong opinions on this from all quarters, but fortunately there’s also some great recent research on the topic which can shed some light on the risks and benefits of both running styles. See below for some key points taken from several recently published papers:

A. Despite the technological developments in modern running footwear, up to 79% of runners today get injured in a given year regardless of footwear or running style (1).
– Layman’s: Runners get injured A LOT. Much more needs to be included in the conversation than “which shoes should I wear” to change this.

B. It is undeniably clear that running without shoes encourages a midfoot/forefoot strike pattern that is associated with a shorter stride length, with the foot landing closer to the center of mass of the body. This reduces the moment arm of the ground reaction force to the hip and knee joints, likely reducing the joint moments that are generated. In fact, a study by Heiderscheit et al. (3) demonstrated that just a 10% decrease in stride length, while still rearfoot striking, results in a significant reduction in hip and knee energy absorption, thereby decreasing the loading to these joints. (1,2)
– Layman’s: Barefoot running encourages the foot to land in a better position which shortens stride length (distance covered in an average step). We KNOW that shorter stride length reduces load on the leg, knee and hip.

C. In addition to a forefoot strike pattern, barefoot running also affords the runner increased sensory feedback from the foot-ground contact, as well as increased energy storage in the arch (1,2).
– Layman’s: Use of ‘standard’ running shoes with a high heel pitch and layers of cushioning may actually be REDUCING EFFICIENCY regardless of where your foot strikes.

D. It is well accepted that when running in modern running shoes, at least 75% of distance runners land on their heel, potentially due to the elevated, cushioned shoe heel(1). A study by Daoud et al. (4) with 52 mid and long distance shod runners showed that mild and moderate running-related injuries occurred 2.5 times more frequently in rearfoot strikers than in forefoot strikers. The Authors also determined that hip pain, knee pain, low back pain, tibial stress injuries, plantar fasciitis, and stress fractures (excluding metatarsal bones) were 2.7 times more likely to occur in rearfoot strikers.
Layman’s: Modern ‘standard’ running shoes encourage landing on your heels which is has been shown to increase risk of injury by 2.5+ times.

E. Very little evidence exists on injury risk of barefoot and minimalist footwear running. Forefoot landing will increase the load to the posterior calf musculature and thereby increase the risk of calf strains and Achilles tendinitis. In addition, a forefoot strike landing can increase the load to the metatarsal heads and one study by Giuliani et al. (5.) reported metatarsal stress fractures in two barefoot runners, however no other research exists (to my knowledge) on concrete relative risk of injury in barefoot runners (1,2).
Layman’s: Barefoot running could potentially lead to overuse injuries of the calf muscle or the bones in your forefoot, but hardly any research exists to tell us exactly how much risk is involved with barefoot/minimalist running.

Conclusion
The main take home point from this is heel-strike running and over-striding is a ticking time bomb for injury, regardless of what you’re wearing on your feet. Due to their design wearing a ‘standard’ running shoe is associated with a high chance of landing on your heels. Barefoot/minimalist shoes encourages midfoot/forefoot striking with associated shortened stride length, reducing load on the leg, knee and hip, but MAY increase risk of calf muscle and metatarsal injury. Runners with recurrent injuries who are heel striking should be encouraged to try and change to midfoot/forefoot striking and reduced stride length, but it is IMPERATIVE that they see a podiatrist/physiotherapist/running coach with sound running knowledge first to develop a program that transitions them slowly to the use of minimal footwear and the adoption of a mild forefoot strike pattern. It takes time to develop the foot and lower leg musculature as well as to acclimate to the plantar sensations during barefoot running. A standard transition period is 2-12 months depending on the runner.